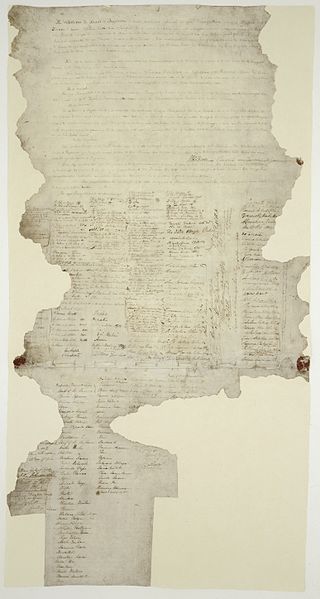 An image of the orginal Treaty of Waitangi first signed by the British and Māori on 6 February 1840.

The Treaty of Waitangi was signed in 1840. It was an agreement between the British Crown and a large number of Māori chiefs. Today the Treaty is widely accepted to be a constitutional document that establishes and guides the relationship between the Crown (the Government of New Zealand) and Māori.

The Treaty promised to protect Māori culture and to enable Māori to continue to live in New Zealand as Māori. At the same time, the Treaty gave the Crown the right to govern New Zealand and to represent the interests of all New Zealanders.

Status of the Treaty in New Zealand law is not settled. Currently, Treaty rights can only be judicially enforced if legislation explicitly refers to the Treaty. See more on the Treaty on the Ministry of Justice Treaty of Waitangi website.

The Office of Treaty Settlements negotiates the settlement of historical Treaty of Waitangi claims, and administers the Marine and Coastal Area (Takutai Moana) Act 2011. Settlement documents are publicly available on this website.

The following 2013 article on the Waitangi Tribunal is available on open access on SSRN:

SSRN open access articles on the Treaty of Waitangi

Ludbrook, Julian, 'The Principles of the Treaty of Waitangi: Their Nature, Their Limits and Their Future' (2014) Victoria University of Wellington Legal Research Paper Series No. 117/2015.