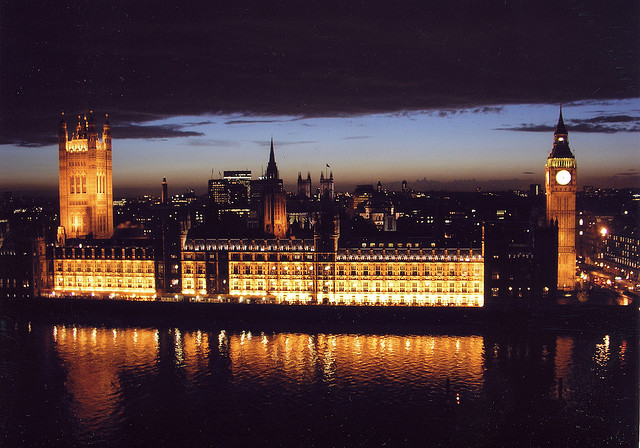 Parliamentary copyright images are reproduced with the permission of Parliament

UK Parliament provides information on the current and past business of both Houses of Parliament and their committees. It also has a wealth of general material on the parliamentary system, including factsheets on parliamentary procedure and history. You will also find details of the composition of Parliament and of the government of the day and links to official publications. Bills back to 2001 are also available here.

The Library has substantial holdings of British Government publications including House of Commons Debates, House of Lords Debates, Parliamentary Papers, and Command Papers. This material is on the library catalogue, and is mainly located in the Government Documents Collection and in Special Collections in the Baillieu Library.

A extensive guide to parliamentary papers has been written by librarians at the Bodleian Law Library.

The House of Commons Information Office has produced a factsheet on Command Papers.

Other databases also include relevant documents:

A list of the popular names of legislation passed up to the late 19th century published in an appendix to Craies on Statute Law.

A brief list of legislation named for a person is also available through Wikipedia.

Common names and abbreviations of legislation can also be searched in Justcite.

What is an Act?

An Act or Statute is a primary piece of legislation passed by the Parliament. Starting as a Bill, the document is discussed in both Houses of Parliament, where any amendments can be made. The Bill must be passed by both Houses before it can receive Royal Ascent and become an Act.

Unlike in many jurisdictions which have written constitutions, the legality of primary legislation in the United Kingdom cannot be challenged in the courts (except for exceptions under the Human Rights Act 1998 and the Scotland Act 1998).

Access To Law provides an overview of online sources of UK legislation.

The British legislation website has a Guide to Revised Legislation on legislation.gov.uk that provides an explanation of the legislative process for all jurisdictions in the UK.

Which version of an Act?

Legislation can be found in several different versions. It is important to know which version you are looking at.

As Enacted (or Original) - the legislation as it was orginally passed

Current legislation can be found in a number of databases:

See this guide from Rutgers-Newark Law Library for some explanation of historical English laws.

Several compilations of pre-1200 legislation exist and many can be found through the library catalogue:

Statutes of the Realm is the most authoritative sources for older UK legislation (see Interpretation Act 1978 (UK) s19(1)(b)).

Prior to 1963, Acts of Parliament were numbered using the year of the sovereign’s reign in which the Act was passed, a system known as regnal years. Under the regnal year system, an Act passed early in a parliamentary session has a citation such as 5 Edw. 7, c. 9, for the ninth chapter in the session that commenced in the fifth year of the reign of King Edward 7th. It was common for a session to extend into a second regnal year, giving rise to a citation such as 8 & 9 Geo. 6, c. 4.

For a comparison table, see this FAQ from Justis or page 122 in How to Cite Legal Authorities / French (1996).

Hard copy resources such as Halsbury's Statutes of England and Wales, Current Law Statutes and Chronological Table of Statutes, although no longer updated, may also provided information on repealed legislation.

A Bill is a draft law; it becomes an Act if it is approved by a majority in the House of Commons and House of Lords, and formally agreed to by the reigning monarch (known as Royal Assent). See this guide to the passage of a bill for more information.

Explanatory Notes are created by the government department responsible for the subject matter of the Act to explain what the Act sets out to achieve and to make the Act accessible to readers who are not legally qualified. Explanatory Notes were introduced in 1999 and accompany all Public Acts except Appropriation, Consolidated Fund, Finance and Consolidation Acts.

Explanatory Notes to current bills can be found on the UK Parliament website, under 'Bill documents' with the relevant bill.

Explanatory Notes to assented legislation can be found on the legislation.gov.uk website, with the relevent act.