There have been several Law Reform Commission inquiries and reports into customary law, which provide a detailed analysis of the views of the day on how customary law was and should be treated within the general legal system. See:

Australian Law Reform Commission, Recognition of Aboriginal Customary Laws (ALRC Report 31, 1986) (note that this inquiry was pre-Mabo and the recognition of native title)

The hundreds of Australian indigenous communities, nations and societies each have their own territories, languages, myths, and laws. Relations between the communities are governed by highly organised, uncodified systems. Customary laws govern, for example, marriage and family, distribution of property, dispute settlement and criminal justice. See more in The Definition of Aboriginal Customary Laws (ALRC, Recognition of Aboriginal Customary Law, Report No 31, 1986)

The legal system brought from Britain when Australia was colonised did not recognise Aboriginal laws and community structures, including laws relating to land. Indigenous people became subject to colonial laws, and Australian general law. All of Australia was treated as terra nullius, meaning 'nobody's land', and able to be claimed by the Crown and acquired by the colonisers. In 1992 Aboriginal title to land was finally recognised at common law, in the landmark case of Mabo v Queensland (No 2) ((1992) 175 CLR 1). The High Court rejected the notion of terra nullius and  recognised a preexisting indigenous system of law - native title ie: Australian law recognised that some Aboriginal and Torres Strait Islander people have rights and interests in land or waters that come from their traditional laws and customs. Therefore, upon colonisation, the Crown did not acquire absolute title; it is subject to preexisting native titles that had not been validly extinguished. Native title can be extinguished only by lawful exercise of government power with clear and plain intention, or by abandonment or surrender of traditional lands to the Crown. The Native Title Act 1993 (Cth) was subsequently enacted to give effect to the Mabo decision, and to set out processes for claiming native title. The Native Title Act also sets out how native title interacts with other people’s rights and interests. A claim for native title can be determined either by agreement or by a court. The Native Title Act created the National Native Title Tribunal to negotiate claims of native title and to retrospectively establish lawful extinguishments of title. 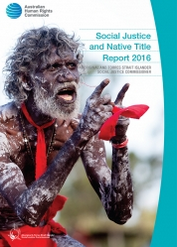 The Social Justice and Native Title Report is a report submitted annually to the Attorney-General by the Aboriginal and Torres Strait Islander Social Justice Commissioner on: