The distribution of law-making authority between the Federal and State Governments is contained in the Ninth Schedule of the Federal Constitution, and is set out in a Federal List (List 1), State List (List 2) and a Concurrent List. The main subject areas of the Federal List (for which only the Federal government can make laws) are external affairs, defence, internal security, civil and criminal law, citizenship, finance, commerce and shipping industry, communications, education, health, labour, censorship, tourism and all matters relating to the Federal Territories. The State List (matters on which only the States can legislate) includes Islamic law, land, agriculture and forestry, and local government. The Concurrent List, under authority of both the Federal and State Governments, includes social welfare, public health, protection of wildlife, heritage, housing, culture, sports, and town and country planning.

The Malaysian Bar's How is a Law Made by Parliament webpage is a useful summary of the passage of a bill through both Houses of Parliament.

Online Hansards for the Dewan Rakyat and Dewan Negara from the First Parliament (1959-64) to current are available on the Parliament website. They can be browsed by year / Parliament or searched. Note that Hansard is only available in Malay.

Bills are available in English:

Laws as passed are published in the Official Government Gazette. Federal Laws cannot come into force until they are published in the Gazette (Article 66(5) of the Federal Constitution). Gazetted laws  are given a PU number (PU = Acts and Ordinances; PU(A) = Subordinate legislation: Royal Proclamations, Orders, Rules, Regulations and By-laws; and PU(B) = all other subordinate legislation).

The Gazette is available in English on the e-Federal Gazette Official Portal. Laws can be searched by date of publication, PU number, title, and Act. The Gazette cannot be browsed. 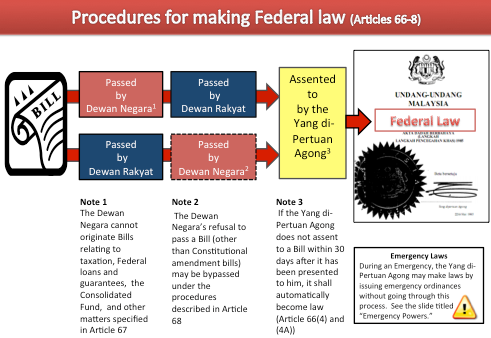 The Laws of Malaysia on the Attorney General's Official Portal (open access) contains the up to date official versions of Federal Acts (principal legislation), including amending, reprinted and repealed Acts, from Act 1 (the Revision of Laws Act 1968 (Reprint 2006)) to current. All Acts are sequentially numbered, irrespective of the year in which they were enacted. All principal laws of Malaysia enacted after 1969 and pre-1969 laws revised by the Commissioner of Law Revision are included.

State Laws, known as Enactments (or Ordinances in Sarawak) are published in the State Gazettes. State Gazettes and open access sources of State laws are difficult to find. We recommend using CLJ Law (UniMelb staff & student access - requires a separate password in addition to your UniMelb password. Get password here) which includes a comprehensive database of State laws, including current and repealed principal and amending State Acts, and subsidiary legislation. Legislation can be searched or browsed.

Syariah laws are on CLJ law (see above) but are also available on open access on the Syariah Law page of the E-Syariah Official Portal. The laws are arranged by State. Current, repealed and amending Enactments and subordinate legislation are listed for each State, with links to the full text.

Please note that this portal is mainly to find out information about the courts and pending trials. The only people who can register to have access to the portal are parties, members of the legal profession, and police.