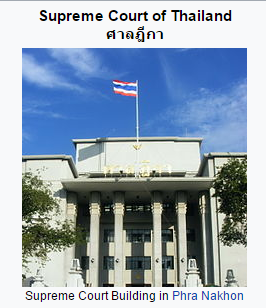 Court judgments are not consistently publicly published and are difficult to find in English. Lower and Appeal court decisions are not published. Selected decisions of the Supreme Court of Justice, Supreme Administrative Court and Constitutional Court have been translated into English and are available on the following open access databases:

The Courts of Justice hierarchy is:

In 2016, a Specialised Appeal Court was established by The Act for Establishment of the Court of Appeal for Specialized Cases B.E. 2558 (2015) and began operation. The Court's jurisdiction covers appeals from decisions of the specialised courts of first instance.

More on the Specialised Appeal Court.

More on the Court system on the Thailand Court of Justice website.

For detailed commentary on the Thai court and judicial system, see The Judicial System in Thailand: An Outlook for a New Century, from the ASEAN Law Association. Note that this undated publication was written while the 1997 Constitution was still in force - please read it with this in mind.