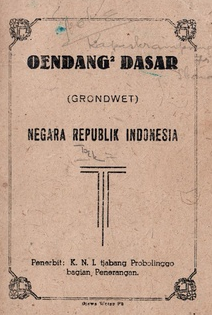 History of the Constitution

The Constitution is known as the Undang-Undang Dasar 1945 or UUD 1945. It was enacted in 1945, when Indonesia was emerging from Japanese control following World War II, and declaring its independence from its former colonial occupier, the Netherlands.  It was replaced by the 1949 Federal Constitution and then by the Provisional Constitution of 1950, while waiting for the 1955 elected Constituent Committee to draft a new one. The Committee did not draft a new Constitution, so on July 5th 1959, by virtue of a Presidential Decree, the UUD 1945 was restored.  It remained unchanged during the New Order.  During the Reform Era, comprehensive reforms were adopted at four sessions of the People's Consultative Assembly (MPR) - in 1999, 2000, 2001 and 2002. These reforms amended existing provisions and introduced many new Articles - including the addition of ten Articles concerning human rights, the transformation of the MPR into an entirely elected People's Consultative Assembly, the establishment of an elected Assembly representing the regions, the redefinition of the powers of the President and of the People's Representative Council, and the introduction of a Constitutional Court.

World Constitutions Illustrated - Indonesia on HEIN Online (UniMelb staff & student access) contains the full text of the Constitutions and Fundamental Laws, including the 1925 Law Respecting the Political Organization of Netherlands India, the 1945 Constitution - both the original text (as returned to force, 5 July 1959) and the consolidated text, as amended up to 2002, the 1950 Provisional Constitution, and a wealth of background and historical constitutional scholarship. Much of the commentary is old, so it is more of historical rather than contemporary significance.

Finding the Constitution in English

The 1945 Constitution is Indonesia's Supreme Law.

The current consolidated Indonesian Constitution are available on several websites, including the Asian Human Rights Commission, UNESCO and WIPO.

World Constitutions Illustrated - Indonesia on HEIN Online contains the full text of the Constitutions and Fundamental Laws, including the 1925 Law Respecting the Political Organization of Netherlands India, the 1945 Constitution - both the original text (as returned to force in 1959) and the consolidated text, as amended up to 2002.

For commentary on the Constitutional Court, see:

Oxford Constitutions of the World (UniMelb staff & student access) contains the full text of the current (1945) Constitution as enacted, and as amended to 2002, as well as a useful and concise Introductory Note on the background to and main features of the current Constitution - including commentary on human rights, separation of powers, judicial review by the Constitutional Court, Also included is bibliography of books and articles.

The Indonesian page on the Legal Systems in ASEAN website (open access) includes detailed commentary on the Constitution.

Holland, Bradley, 'Clemency and Constitutional Duties in Indonesia: A Promise Made is a Promise Kept?' (2018) 19(1) Australian Journal of Asian Law Article 2 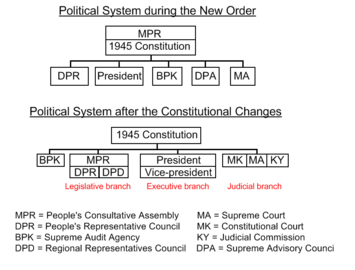