The New Zealand court hierarchy is set out in the diagram below. [Click for larger image] 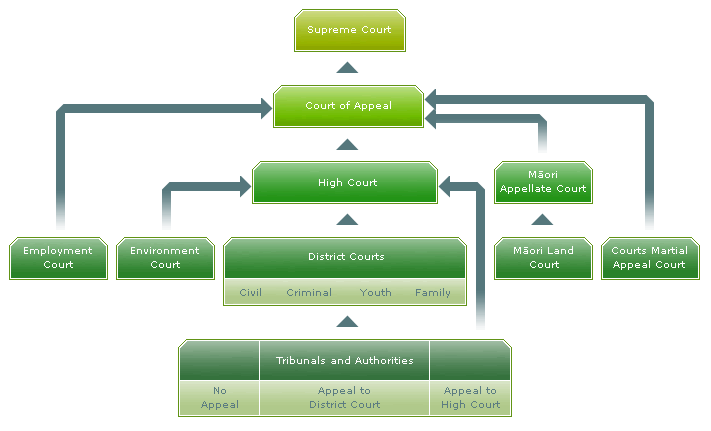 The remaining courts of general jurisdiction are (in order of seniority): the Court of Appeal, the High Court, and the District Court. There are also a number of specialist courts (eg the Maori Land Court; the Environment Court) and administrative tribunals.

Finding Decisions from Multiple Courts on your Topic

BriefCase is a comprehensive index of more than 180,000 cases, sourced from a variety of New Zealand Courts and Tribunals, together with selected leading foreign cases. BriefCase entries contain case summaries, legislation cited, cases cited and words and phrases judicially considered.

ViewCase provides access to full text PDFs of over 150,000 original judgments. Where a BriefCase entry does not have a ViewCase image attached, it may mean that the case is subject to a suppression order. For cases from 2003 onwards, see the end of the summary for suppression details.

Noting up your Case - Litigation History and Citing Cases

LinxPlus has a 'Legislation Judicially Considered' box on the search screen. Type your legislation title if you want to find all cases on a piece of legislation. To find cases on a specific section, the most effective format is:

Important Note: You do not need to put inverted commas around the legislation title. You do need to add a small s in front of the section number - with no space between the s and the number. If you don't use the s, you will get no results.

Note: The w/p connector finds the terms within the same paragraph - this is recommended to ensure that the section located is in respect of the correct legislation title. If you use the and connector, you may find cases where the section was from another act also cited in the case.

Briefcase/Viewcase on WestlawAu (UniMelb staff and student access) has a 'Words & Phrases' box, which will identify cases that define your term.

Where a case is reported in the NZLR, the NZLR version of the judgment should be cited in preference to other versions.

The NZLR is available online and in print:

The District Court Reports are available on Lexis Advance from 1996 to current. These reports provide a large selection of important cases, civil and criminal, from throughout New Zealand.  Also included in the Reports are selected High Court decisions that are not reported in NZLR.

The New Zealand Family Law Reports (NZFLR) (vol 1, 1982 to current) are available on Lexis Advance. Pdf replicas of the reports are available from 2002. The NZFLR also has a very handy alphabetical subject index.

The  New Zealand Administrative Reports (NZAR) are available on Lexis Advance from 1991 to current. 1991-1994 decisions provide headnotes only. Full text is available from 1995.

Judgments of particular public interest issued by the Supreme Court, Court of Appeal and High Court are updated regularly and can be accessed via the Courts of New Zealand website. These judgments remain here for 90 days after delivery.

From 2016, the District Courts of New Zealand website publishes a selection of judgments from the civil jurisdiction, criminal jurisdiction, youth court and family court, with an emphasis on significant decisions of particular interest.

Searching on NZLII is limited to full-text searching, which can be unwieldy when you are looking for cases in an area of law rather than specific cases.

When citing a case, the media neutral citation should always be given (if available). For guidance on when the various New Zealand courts and tribunals adopted neutral citations see rule 3.3.3(b) of the NZ Style Guide.

The University of Waikato Library Directory of Decisions complies information about the courts, tribunals, statutory bodies and other bodies in New Zealand which make legal or quasi-legal decisions. The site indicates where the decisions are available in both free and subscription print and online resources.

Note that this resource is only up to date in print. The online version is six months behind.