Following are some tips to guide you in the legislative research process:

1. Know which version of an Act you are looking for

2. Be aware of the legislation making process

3. Use official sources for legislation

4. Use resources to assist in reading, interpreting and understanding legislation

Tip 1: Know which version of an Act you are looking for

There are three types of Acts used in legislative research: up-to-date Acts, point in time Acts and Acts as made:

Up to date Act (compilation, including all amendments to date)

When you are looking for up to date Acts, you may come across the following terms:

Acts as passed by parliament, also referred to as sessional Acts or Acts as passed. Acts as made are available on the parliament website for each jurisdiction. See the the jurisdictions pages of this guide for further information.

Acts are commonly referred to as statutes, legislation or law. There are two types of Acts:

Tip 2: Be aware of the legislation making process

Broadly speaking, an Act starts as a Bill which is presented and debated in parliament. Once the Bill has passed all three readings in each house and it has received royal assent by the Governor-General or the State Governor it becomes an Act. The assent is published by proclamation in the Government Gazette which stipulates the date the Act commences.  It is important to note that an Act or different sections of an Act can commence at future dates and at different times. If you are unsure of whether an Act or sections of an Act have come into operation check legislation commencement tables or annotated statutes. 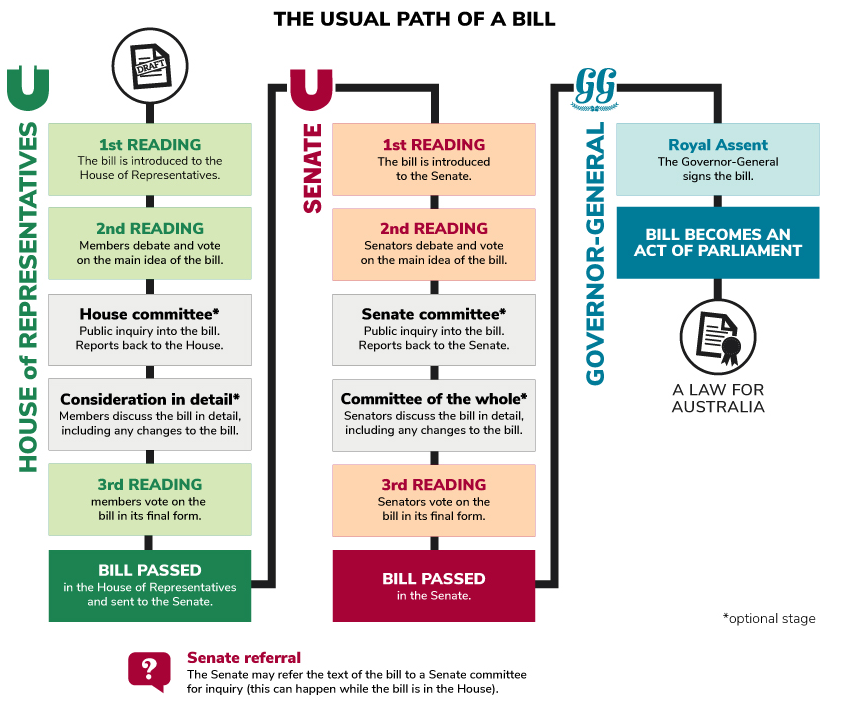 Making a law in the Australian Parliament by Parliamentary Education Office available at https://www.peo.gov.au/understand-our-parliament/how-parliament-works/bills-and-laws/making-a-law-in-the-australian-parliament/. Licensed under a Creative Commons Attribution-NonCommercial-NoDerivs 3.0 Unported License.

Official sources for legislation are those published by government printers or government websites. It is important to use these sources over free sites such as AustLII.  Quick tools for legislative research include:

Materials such as bills, explanatory memoranda, parliamentary papers and government reports are a great way of understanding the background to a particular legislative area. This material is referred to as extrinsic material.

Secondary sources such as encyclopaedias, text books and journal articles are a good starting point to get an overview of legislation, particularly if you are not sure what legislation governs a particular area.

Annotated Acts are extremely useful tools a) for understanding and interpreting an Act or a specific section of an Act and b) to trace the history of an Act. Annotated Acts often include:

The Law Library subscribes to the LawNow Legislation Citator on Lexis Advance.

Databases such as CCH, Lexis Advance and Westlaw AU include annotated Acts on a range of subject areas.