The Constitution expressly enumerates the legislative powers of the Commonwealth Government - mostly in ss 51 and 52. Subject to a few exceptions, the States retain the power to legislate on all other matters.

The Constitution has separate chapters on the Legislature, Executive and Judiciary, preserving the doctrine of separation of powers.

The Constitution may be altered only by a law passed by the Commonwealth Parliament following a referendum (s 128). There have been 44 referenda since 1901 and only eight of these have resulted in an amendment. Of the eight amendments to the Constitution, the most notable is the 1967 amendment, which gave the Commonwealth Parliament the power to make laws in relation to Aboriginal and Torres Strait Islander people and to allow for Aboriginal and Torres Strait Islander people to be included in the census.

It is notable that the Constitution contains no Bill of Rights and few express guarantees of individual rights. For more information on the protection of human rights at the Commonwealth level, see the Commonwealth Human Rights Framework box on the Australian page of our Human Rights Law Research Guide.

The Federal Register of Legislation (open access) contains the official up to date Constitution, incorporating all amendments, as well as amending Acts. This compilation includes the Proclamation Declaring the Establishment of the Commonwealth, Letters Patent Relating to the Office of Governor-General, the Statute of Westminster Adoption Act 1942, and the Australia Act 1986.

The Constitution began its life as clause 9 of the UK enabling Act, the Commonwealth of Constitution Act 1900 (Imp) 63 & 64 Vict, c 12. A British Act was necessary because before 1901 Australia was a collection of six self-governing British colonies and ultimate power over those colonies rested with the British Parliament. On the commencement of the UK Act on 1 January 1901, the Commonwealth of Australia came into being and the six colonies became the six States of Australia.

World Constitutions Illustrated on HEIN Online (UniMelb staff & student access) contains PDF replicas of historic (as made and point in time) versions of the Constitution, amending legislation and other relevant legislation ie:

Citing the Constitution in AGLC

Introductions to & Literature on the Constitution

For a useful and succinct overview of and background to the Constitution, see 'Overview' by the Australian Solicitor-General in the current compilation of the Constitution.

For a detailed introduction to Australian Constitutional Law we recommend that you use secondary material such as books and encyclopaedias. A good place to start is Halsbury's Laws of Australia, Title 90 - Constitutional Law - on Lexis Advance. This is arranged by topic and includes commentary and leading cases. 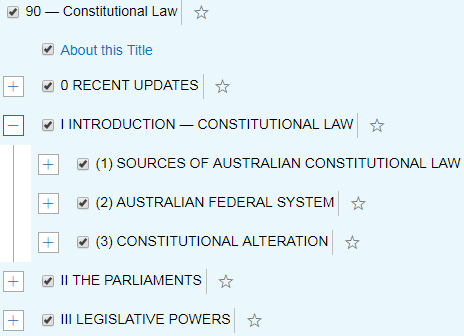 See also the Australian Constitutional Law Books boxes on the Secondary Sources page of this Guide.

For more in-depth information on specific aspects of constitutional law, use journal articles. See the Australian Constitutional Law Journals box on the Secondary Sources page of this Guide.

For more help on using secondary literature in your research, refer to the Secondary Sources for Legal Research guide. 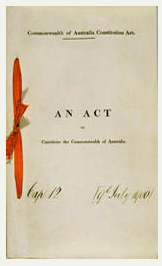