This page will help you find cases on the Commonwealth Constitution. For more detailed information about finding Australian cases, please see the Australian Case Law page on our Australian Cases, Legislation and Law Reform Research Guide.

All books discussing your topic will refer to leading cases. For landmark constitutional cases (the most important cases), see the following book, but note it was written in 2003, so use more recent books to update it:

Most of JADE is open access (you need to register your email address to use it - see here for more details). 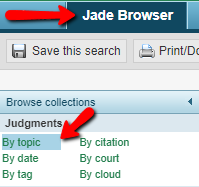 Australia has no constitutional court. Matters arising under the Constitution or involving its interpretation are heard in courts of general jurisdiction.

Finding Cases on Sections of the Constitution

The following all have similar content, but enough differences to make it worth using all if you want to search comprehensively.

Most of JADE is open access (you simply need to register your email address to use the open-access part of JADE. Finding cases on legislative provisions requires a subscription - see here for more details). 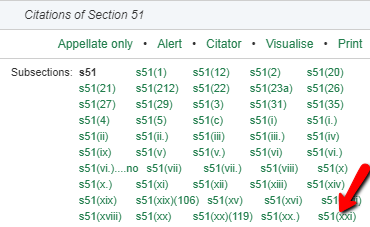 Landmark decisions on the Commonwealth Constitution are made by the High Court of Australia and reported in the authorised report series, the Commonwealth Law Reports ('CLR'). CLRs are available on WestlawAU (UniMelb staff & student access). The hyperlinks on the unreported citations for the cases below take you to the cases on JADE (open access). Many of the older cases on JADE include images of the reports in the CLR.

R v Kirby; Ex parte Boilermakers' Society of Australia (1956) 94 CLR 254; [1956] HCA 10 ('Boilermakers Case') - a landmark decision on the separation of powers. The majority of the High Court held that the Commonwealth Court of Conciliation and Arbitration was not a Chapter III court and could not validly exercise judicial functions.

Mabo v Queensland (No 2) (1992) 175 CLR 1; [1992] HCA 23 ('Mabo') - this decision recognised native title in Australia for the first time. The High Court rejected the doctrine of terra nullius in favour of the common law doctrine of aboriginal title.

Section 51 (xxix) external affairs - Commonwealth v Tasmania (1983) 158 CLR 1; [1983] HCA 21 ('Tasmanian Dam Case') - in this case, the Commonwealth succeeded in stopping the building of a hydro-electricity dam proposed for Tasmania. It was held that the Commonwealth had power under section 51 (xxix) of the Constitution to stop the dam based on Australia's international obligations under the World Heritage Convention.

Section 51 (xxxv) - conciliation and arbitration for the prevention and settlement of industrial disputes extending beyond the limits of any one State - Amalgamated Society of Engineers v Adelaide Steamship Co Ltd (1920) 28 CLR 129; [1920] HCA 54 ("Engineers' Case") - this case overturned the doctrine of implied intergovernmental immunities and reserved state powers and established the modern basis for the legal understanding of federalism in Australia.

Section 51 (xxxix) - matters incidental to the execution of any power vested by this Constitution in the Parliament or in either House thereof, or in the Government of the Commonwealth, or in the Federal Judicature, or in any department or officer of the Commonwealth - Pape v Commissioner of Taxation (2009) 238 CLR 1; [2009] HCA 23 - this case revolved around the constitutional validity of the Tax Bonus for Working Australians Act (No 2) 2009 (Cth) which gave one-off payments of up to $900 to Australian taxpayers. By a margin of 4-3, the High Court held that the Act was a valid law under the Constitution.

Section 92 - freedom of interstate trade. Cole v Whitfield (1988) 165 CLR 360; [1988] HCA 18 (the 'Tasmanian Lobster Case'). In this case, the High Court overruled the long-held notion that the words "absolutely free" in section 92 of the Australian Constitution protected a personal individual right of freedom in interstate trade. It was instead replaced with the economic notion of "free trade". The Court also overruled two long settled approaches to the interpretation of the Constitution, that no regard could be had to the debates of Constitutional Conventions in the interpretation of the Constitution.

Section 96 - grants of financial assistance to a State by the Commonwealth on terms or conditions. In 1942, the Commonwealth passed four new laws designed to raise funds to support the war effort by encouraging the States to give up their right to collect income tax. On June 22 1942, South Australia, Victoria, Queensland and Western Australia went to the High Court seeking the legislation to be declared invalid. In the case of South Australia v Commonwealth (1942) (1942) 65 CLR 373, [1942] HCA 14 (the 'First Uniform Tax Case'), the High Court ruled that the four pieces of legislation were valid. In 1957, Victoria again challenged the constitutionality of the scheme. But in Victoria v Commonwealth (1957) (1957) 99 CLR 575, [1957] HCA 54 (the 'Second Uniform Tax Case'), the Court held that Commonwealth grants to the States under section 96 of the Constitution may be validly tied to prescribed purposes.