The European system of human rights was created under the auspices of the Council of Europe, an intergovernmental organisation with 47 Member States.

The European Committee of Social Rights 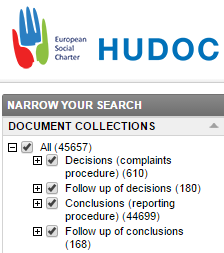 RSS feed of latest decisions of the Committee can be found below (use Firefox, IE or Safari to view feeds - they do not work using Chrome).

The European Court of Human Rights

The European Court of Human Rights (ECtHR) is based in Strasbourg, France and began operating in 1959. The Court has jurisdiction to decide complaints ('applications') against all 47 Council of Europe Member States concerning alleged violations of the European Convention on Human Rights. Individuals, groups of individuals, non-governmental organisations and States may submit applications directly to the Court. The person, group or NGO does not have to be a citizen of a State Party, but the application must concern violations of the Convention allegedly committed by a State Party that directly and significantly affected the applicant. Individuals alleging human rights violations must generally have first tried to resolve the problem using appropriate remedies available at the national level. States will only be considered internationally responsible for human rights violations that the government failed to remedy when it had the opportunity to do so. The Court may also issue emergency protective orders ('interim measures') in exceptional cases when the applicant faces a real risk of irreparable harm. 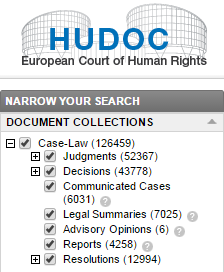 Admissible applications are decided on the merits. The HUDOC-ECHR Case Law database contains all decisions and judgments on admissibility and merits from the first case in 1960 to current. It can be searched or browsed by eg: State Party, organisation, national legislation, keywords, date etc. Using HUDOC is the best way to find the most recent cases.

The judgments on the HUDOC database are unreported. Not all judgments and decisions are subsequently reported - usually only those deemed significant. If you need to find a reported version, check:

Reports of Judgments and Decisions (cited in the case-law as ECHR and available in HUDOC under the importance level ‘Case Reports’) is the official online collection of the Court's leading judgments, decisions and advisory opinions since 1998, and is the preferred report series to cite. Publication is about three years behind. To see if recent cases have been selected for inclusion in the reports, check the annual lists under the Reports Case Selection heading. See also Case-law references of judgments, advisory opinions and published decisions - a master list of all judgments, advisory opinions and decisions that have been published or selected for publication in the Court’s official series.

European Human Rights Reports ('EHRR') on Westlaw UK. This report series contains cases from the ECtHR and European Commission on Human Rights only. Cite this series if the decision is not reported in the official Reports of Judgments and Decisions. 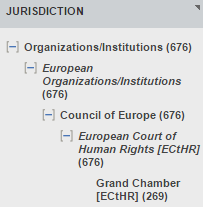 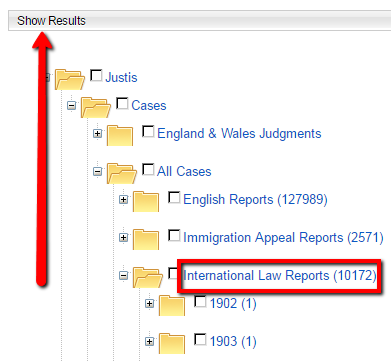 The Council of Europe & the EU

The European Commissioner for Human Rights

The Council of Europe Office of the Commissioner for Human Rights is an independent body which monitors human rights compliance with regional obligations, identifies gaps in protection and issues of concern in the region, facilitates activities of National Human Rights Institutions (NHRIs) and civil society, and provides advice, recommendations and information on human rights protection to the Member States of the Council of Europe.

More on the role of the Commissioner from the International Justice Resource Centre.

The European Commission on Human rights was a special tribunal that operated between 1953 and 1998.

More information on the Commission can be found on RefWorld.

Note that although HUDOC contains most Commission decisions, not all are in the database.

Selected Commission decisions are reported in:

To find academic / scholarly journal articles on European human rights law, irrespective of the journal in which they are published, we recommend using:

The following databases will also include articles on the European human rights system:

In addition to the above, for case notes / summaries / commentary on individual ECtHR decisions, use the Human Rights Case Digest on HEIN Online. This very useful digest was published between 1990-2008.

Can also be accessed via Westlaw UK.