Halsbury's Laws of England (volume 88A 2013) RIGHTS AND FREEDOMS on Lexis Advance (UniMelb staff and student access) is a good starting point for your research into UK human rights law. Halsbury's provides up to date commentary and links to relevant legislation and significant cases.

To get there, scroll to Rights and Freedoms in the Table of Contents, then click the + buttons to browse to more specific topics or tick the boxes and search the content. 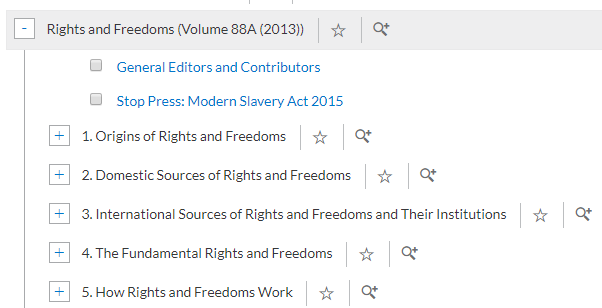 Information about the legislative history of human rights in the UK can be found on the Equality and Human Rights Commission website.

The key legislative source of human rights in the UK is the Human Rights Act 1998 c. 42

The Human Rights Act gives legal effect in the UK to many fundamental rights and freedoms contained in the European Convention on Human Rights (ECHR). The Act makes the ECHR part of the law of the UK, so people in the UK can complain in UK courts about a contravention of their Convention rights by public authorities.

An individual who has sought a remedy UK courts and who is dissatisfied with the outcome can pursue a remedy at the European Court of Human Rights.

The Human Rights Act is administered by the UK Ministry of Justice.

For a detailed and up to date analysis of the Human Rights Act, and references to key cases interpreting the provisions of the Act, see Westlaw UK's Human Rights Insight (UniMelb staff and student access only).

Brief information about the Human Rights Act, the rights and freedoms it protects, and its relationship with the ECHR can also be found on the Northern Ireland Human Rights Commission website.

Other human rights acts are:

The Equality Act prohibits discrimination in areas such as employment, education and services on the basis of age, disability, gender reassignment, marriage and civil partnership; pregnancy and maternity, race, religion or belief, sex, or sexual orientation ('protected characteristics').

The  Equality and Human Rights Commission is the regulatory body that enforces the Equality Act.

More information about the Equality Act can also be found on the  Equality and Human Rights Commission.

The Modern Slavery Act prohibits slavery, servitude and forced or compulsory labour, and human trafficking. The Act creates the office of the Independent Anti-slavery Commissioner, a Home Office monitoring body.

The Joint Parliamentary Committee on Human Rights consists of members appointed from both the House of Commons and the House of Lords, to examine matters relating to human rights within the United Kingdom (excluding consideration of individual cases).

The Committee's work includes scrutinising every Government Bill for its compatibility with human rights, including:

Cases on a topic in UK courts

All cases that are appealed from UK courts to the ECtHR have the UK as a named party.

A. Use Westlaw UK to find the case - by the name of the individual who would have appealed the decision to the ECtHR.

B.  Use the HUDOC case law database on the European Court of Human Right's website.

Finding a reported version of an ECtHR decision

The cases on the HUDOC database are unreported. Not all cases are subsequently reported. If you need to check for a reported version for citation purposes, look for the ECtHR case in the Cases tab on Westlaw UK eg: Ali v United Kingdom - it will provide parallel citations listed in authority order - for example:

Links are provided to law report series in Westlaw UK.

Some of the report series listed above contain cases from the ECtHR only - for example, the European Human Rights Reports ('EHRR' - on Westlaw UK); some also contain reports of cases from domestic courts - for example Butterworths Human Rights Cases ('BHRC' - on Lexis Advance) also contains significant cases from Australia, New Zealand, Canada, the UK, Ireland and South Africa; and some are UK domestic law report series - for instance, the Entertainment and Media Law Reports ('EMLR' - on Westlaw UK).

If a series is in the Westlaw UK 'where reported' list but not hyperlinked, the series is not available on Westlaw UK. To find the full title of the report series abbreviation so you can check the catalogue for holdings, use the Law Library's Legal Abbreviations webpage.

To find UK and European academic / scholarly journal articles on UK human rights law, irrespective of the journal in which they are published, we recommend using Legal Journals Index (LJI) on Westlaw UK (UniMelb staff and student access).

The UK follows a dualist approach with respect to the domestic effect of international treaties. This is similar in approach to other Commonwealth countries such as Canada, Australia and New Zealand. The dualist system means that in order for the treaty obligations to be given the force of law domestically, the UK cannot simply become a party to the treaty - the treaty must be incorporated into domestic legislation (Maclaine Watson & Co Ltd v Department of Trade and Trade and Industry [1990] 2 AC 418, 474-5). An example of incorporation of a human rights treaty into UK domestic legislation is the Human Rights Act 1998 c. 42, which gives legal effect in the UK to many fundamental rights and freedoms contained in the European Convention on Human Rights (ECHR).

When the UK is a party to a treaty but  has not implemented this domestically by statute, there is a 'prima facie presumption that Parliament does not intend to act in breach of international law', so in cases of ambiguity, the treaty obligations are presumed to prevail (Salomon v Commissioners of Customs and Excise [1967] 2 QB 116, 143-4 (Diplock LJ)). See also Eirik Bjorge, 'Can Unincorporated Treaty Obligations Be Part of English Law?' (April 19 2017) University of Oslo Faculty of Law Research Paper No. 2017-18 (open access).

See also the UK chapter in:

UK compliance with its ECHR Obligations

Check the UK's ratification status and reservations of the core human rights treaties in the UN Treaty Collection Status of Treaties database.

The UK has ratified 7 of the core international human rights treaties. These are:

Reports to and by the UN

The UK is required to submit periodic reports to the UN on its implementation of and compliance with each of the seven core UN human rights treaties it has ratified. The UK's Reports to the United Nations can be found on:

The UK Country Report includes information on the latest Universal Periodic Review, and the status of the country in relation to UN Charter-based bodies and Treaty bodies.

US Department of State Reports

Human Rights ranking in the Rule of Law Index

In the latest Rule of Law Index from the World Justice Project, the UK ranked 14th out of 102 countries for its adherence to protection of fundamental human rights. See the UK statistics on the Rule of Law website.

The factors taken into account in assessing the UK's human rights rank are those established under the Universal Declaration :

See the full Rule of Law Index for all countries here.