For concise and helpful overviews of the legislative process see:

Use LEGISinfo (open access) on the Parliament of Canada website to find the text of all versions of bills considered and those currently before Parliament, very useful legislative summaries by the Library of Parliament, all information about the bill's passage through the Senate and the House of Commons - including first, second and third reading speeches, major speeches at the second reading (in the Hansard Debates), committee reports, coming into force details, and further reading such as journal articles, press releases and cases.

Official reporting of Parliamentary debates began in 1871 in the Senate, and in 1875 in the House of Commons. 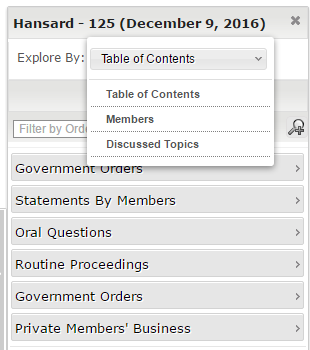 House of Commons Hansards can be searched. They are available from January 17, 1994 (35th Parliament, 1st session) to current.

From the 2nd Session of the 40th Parliament (January 2009) keyword searches of the Debates, Journals and Committee Evidence can be performed using a search and browse tool. Click on Search the Publications tool in the left-hand navigation menu. For more information, see the Search and Browse FAQ and User Guide documents. Earlier Debates can only be browsed.

In addition, when viewing a particular daily Hansard, a 'Publication Explorer' menu will appear on the right of the page - this allows you to search that particular Hansard by eg: topic, member etc.

Orders in Council are available in:

The Canada Gazette has been the official publication of the Government of Canada since 1841. The online PDF version of the Canada Gazette has been official since April 1, 2003. The Gazettes are divided into Part I: Notices and Proposed Regulations, Part II: Official Regulations, and Part III: Acts of Parliament (this includes Proclamations of Canada and Orders in Council relating to the coming into force of Acts).

The Gazettes are available: