The Constitution is the supreme law of the Kingdom of Cambodia. All laws and decisions made by State institutions must be in strict conformity with its provisions (Article 150 of the Constitution).

Text of the Constitution of Cambodia

There have been six versions of the Constitution since 1945:

The present Constitution of the Kingdom of Cambodia - the New Constitution of 1993 - was adopted in compliance with the 1991 Agreements on a Comprehensive Political Settlement of the Cambodia Conflict ('the Paris Agreement') - 1663 UNTS 27. The 1993 Constitution was made under the influence of the United Nations and the International Community and reflects universal and modern constitutional characteristics – democracy, human rights, and rule of law – and also its own historical and traditional characters in an attempt of restoring historical continuity: kingship, state religions and state institutions. This Constitution enshrines a British/Japanese model of parliamentary democracy of government, rather than the French or American system of presidential democracy with the strict separation of powers. The main principles and characteristics of the Constitution are: 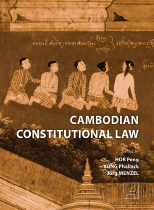 The open access book Cambodian Constitutional Law by Hor Peng, Kong Phallack & Jörg Menzel (Konrad-Adenauer-Stiftung, 2016) provides a detailed scholarly analysis of the Constitution, and includes an English translation of the current Constitution as amended, indicating clearly which Articles have been amended .

The open access book Introduction to Cambodian Law (Konrad-Adenauer-Stiftung, 2012) contains excellent and in-depth commentary on the background and evolution of the Constitution, commentary on all six constitutions and the Paris Agreement, and analysis of the main features of the current Constitution - written by Hor Peng. See pages 23-69.

Oxford Constitutions of the World (UniMelb staff & student access)  - contains an English version of the current Constitution as amended up until 2008 accompanied by a concise introductory background and commentary, comparative notes on the 1999 amendments and a bibliography of books and articles.

World Constitutions Illustrated on HeinOnline (UniMelb staff & student access) contains the original text of the current Constitution as passed in Khmer and in English, as amended to 2008, amending Acts, and original source documents, scholarly articles and commentary. This source is a good place to find historic, rather than up to date, scholarship.

Each Cambodian legal instrument takes its validity and legitimacy from the instrument that is placed above it. A new rule therefore:

The hierarchy of laws is:

The National Assembly and the Senate share legislative power. Senators, National Assembly members and the Prime Minister have the right to initiate legislation (Article 91 of the Constitution). More information on enactment of laws on the Cambodian Law Library website.

New legal instruments must be published in the official Royal Gazette. This is not available online or in English - however, a 2nd February 2017 news item in the Phnom Penh Post entitled 'Royal Gazette to move online' notes that in 2017 the government will stop printing the Royal Gazette and begin publishing new editions freely online. It is unknown when this will happen, or whether the Gazette will be available in English and Khmer.

The official language of Cambodia is Khmer.

There is no one place to find up to date Cambodian laws in English.