The African regional human rights system was established under the auspices of the African Union.

The African Charter of Human and Peoples' Rights ('the Charter' - also known as the Banjul Charter) is an international human rights instrument  intended to promote and protect human rights and basic freedoms in the African continent. Oversight and interpretation of the Charter is the task of the African Commission on Human and Peoples' Rights, which was set up in 1987 and is headquartered in Banjul, Gambia.

The African Commission on Human and Peoples’ Rights promotes and protects human rights in 53 of the 54 Member States of the African Union (with the exception of South Sudan) that have ratified the Charter. The Commission accepts complaints ('communications') from individuals, groups of individuals, non-governmental organisations, and States concerning alleged violations of the Charter.

A Protocol to the Charter was adopted in 1998 and came into effect in 2005. Article 1 of the Protocol established the African Court of Human and Peoples' Rights. Based in Arusha, Tanzania, the Court was established in 2006 and handed down its first decision in 2009. The Court has advisory and contentious jurisdiction concerning the interpretation and application of the Charter, the Protocol and any other relevant human rights instrument ratified by the States concerned. Its jurisdiction extends to the States that have ratified Article 1 of the Protocol. According to Article 5 of the Protocol and Rule 33 of the Court Rules, the Court may receive complaints and/or applications submitted to it either by the Commission or State parties to the Protocol or African Intergovernmental Organizations. As at February 2016, 30 countries have ratified the Protocol. NGO's with observer status before the Commission and individuals from States which have made a Declaration accepting the jurisdiction of the Court can also institute cases directly before the Court. As at February 2016, only seven countries had made such a Declaration: Burkina Faso, Ghana, Malawi, Mali, Rwanda, Tanzania and Republic of Cote d'Ivoire.

The Commission and Court are charged with interpreting and applying a number of regional human rights instruments and non-treaty documents. See the full list of these instruments.

The African Human Rights Case Law Analyser can be used to find cases by court/tribunal, country, keyword or legal instrument. Cases can be browsed, or the Documents tab used to search. A very useful feature is the citator - each Legal Instrument (Charter, Treaties, Protocols, Declarations,Statutes and Rules) includes links to cases citing it, and each case provides links to citing cases. 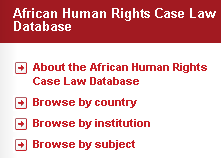 José Pina-Delgado, 'The African Court on Human and People’s Rights and its Position in the International and African Judicial Architectures' in Dário Moura Vicente, Towards a Universal Justice? Putting International Courts and Jurisdictions into Perspective (Brill, 2016) 98-135 link to e-book chapter (UniMelb staff & student access). 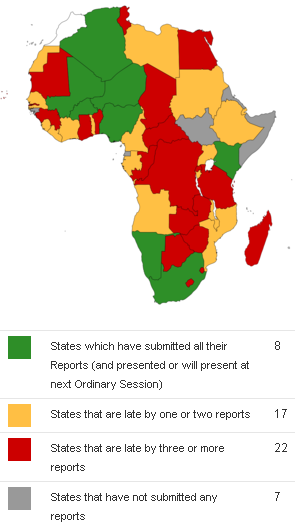 See ratification status by all African states of all binding regional human rights legal instruments. The binding instruments that have not been ratified by all states are the Refugee Convention, Womens' Protocol, Child Charter, African Charter on Democracy and the Protocol on the Establishment of the African Court. 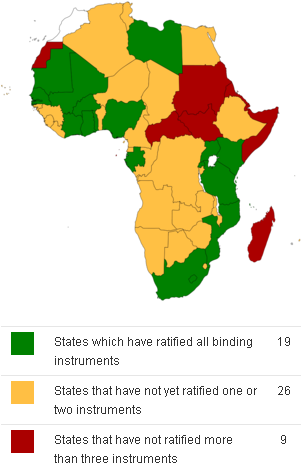