Flag designed by  Kwakwaka'wakw artist Curtis Wilson
to represent all the First Nations of Canada.

Most First Nations and other Aboriginal communities have their own flags. See these on Wikipedia Commons. 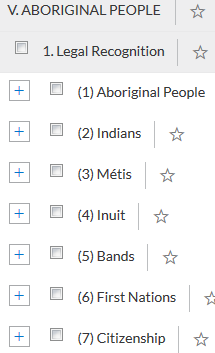 Aboriginal / Indigenous Canadians comprise 4.9 % of Canada's population of 35 million (2016 figures - source: Wikipedia). There are three major groups: First Nations (or Indians), Inuit and Métis. There are over 630 First Nations in Canada (over 1.6 million people), about 53 Inuit communities (65,000 people) and about 400,000 Metis people.

For a brief introduction, see Law of Indigenous Peoples in Canada on the open access Canadian Encyclopedia.

For a succinct summary of Canadian Indigenous law, legal history and the place of Canadian Aboriginal law within the contemporary Canadian legal system, see the Historical and Legal Background chapters in the Aboriginal Law section of Halsbury's Laws of Canada on Lexis Advance (UniMelb staff & student access).

See also the sections on Native Peoples and Native Rights in the Canadian Law chapter in the following encyclopaedia: