This LibGuide introduces the basics of Open Access, including different pathways to making your work open, the benefits of OA, OA policies, OA at the University of Melbourne, and more...

Scholarly publishing is undergoing a period of rapid change. The past decade has seen a proliferation of Open Access journals, the rise of funder Open Access mandates, the threat posed to scholarly publishing by ResearchGate and academia.edu, the arrival of Sci-hub, and a push for Open Science principles more broadly. Below is a summary (as of January 2019) of recent developments in this space. For a more detailed overview of OA developments, past and present, you may wish to check out the Open Access Directory's Timeline of the Open Access Movement. 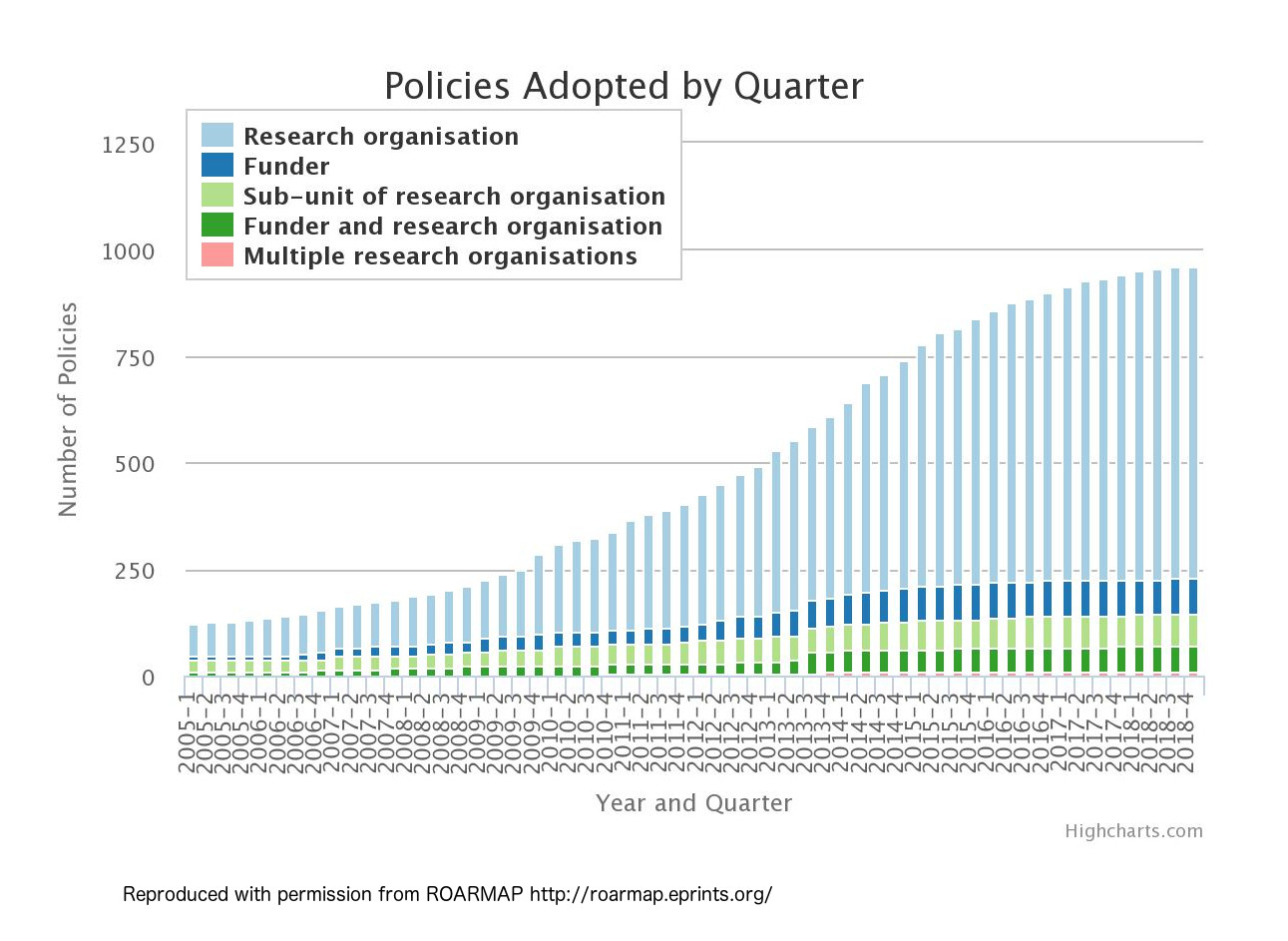 As the image opposite shows, there has been a dramatic increase in Open Access policies over the last decade. These policies have typically been 'Green OA' policies, requiring the deposit of a peer-reviewed version of a work into a repository or other platform within a certain time period (see, for example the ARC and NHMRC Policies). At the time of writing (January 2019), however, funders and research institutions are showing signs of becoming more assertive and prepared to challenge the status quo of the publishing industry. The most notable of these developments is Plan S, launched in September 2018 by COALition S, a consortia of funding agencies from 13 different European countries, and three charitable foundations (including the Bill and Melinda Gates Foundation). Plan S aims to budge scholarly publishing away from a subscription-based model. Under Plan S, researchers receiving funds from any participating bodies, will no longer be able to publish in a hybrid journal, or fulfill OA requirements via delayed OA with an embargo. Instead, publications must be made OA immediately and must have a suitable open licence  (preferably a CC BY Licence) providing clear guidance governing reuse. Plan S also outlines a number of other requirements which journals and repositories must meet to ensure pricing structures are transparent, works are appropriately preserved, and that records possess high quality metadata and are machine readable. You can read more about the implementation guidelines and feedback process here.

The 'Flipped' or 'Publish and Read' model

Closely related to the aims of Plan S, have been attempts to  'flip' the scholarly publishing ecosystem away from a subscription-based model to Gold OA. This flipped approach is occurring at the level of individual journals (the most highly publicised flip being that of the journal Lingua which saw the editorial board dramatically resign and start up a new journal Glossa). IT is also occurring at the level of institutional and consortia negotiations with publishers, where attempts are being made to move to a 'publish and read' model where all published journal articles are immediately OA and remain so in perpetuity. At the time of writing, the most notable of these is Projekt DEAL which involves a consortia of German universities and research organisations pushing for nationwide licensing arrangements that will bring about such a model. To date, DEAL has negotiated successfully with Wiley and is still in negotiations with Springer Nature and Elsevier. Part of these negotiations have seen a refusal from some German institutions to resign a subscription deal with Elsevier, and as of July 2018 a number of German institutions no longer have access to Elsevier published titles.

As discussed in more detail in the What is Open Access? section of this guide, the arrival of 'Black' or 'Illegal' OA via SCNs such as ResearchGate hosting illegal copies, and in the form of Sci-Hub, poses a critical threat to the paywall-based systems of the large publishing houses. Some commentators have suggested Sci-Hub is providing scholarly publishing with its very own 'Napster moment' (some 20 years after Forbes magazine famously, and somewhat erroneously, predicted that scholarly publishing would be the 'Internet's first victim').

Pre-print repositories have been around for some time, with the Physics/Maths/Computer Science repository arXiv dating back to 1991 and the Social Science Research Network (SSRN) repository first launched in 1994. The last few years, however, have witnessed a proliferation of new pre-print servers, including bioRxiv (founded 2013), PsyArXiv (2016), EarthArXiv (2017), LawArXiv (2017). Many of these new services have been launched with support from the Centre for Open Science as it endeavours to accelerate the processes of scholarly peer-review, publishing and discovery and overcome the often lengthy delays between submission and publication in the current scholarly publishing model. 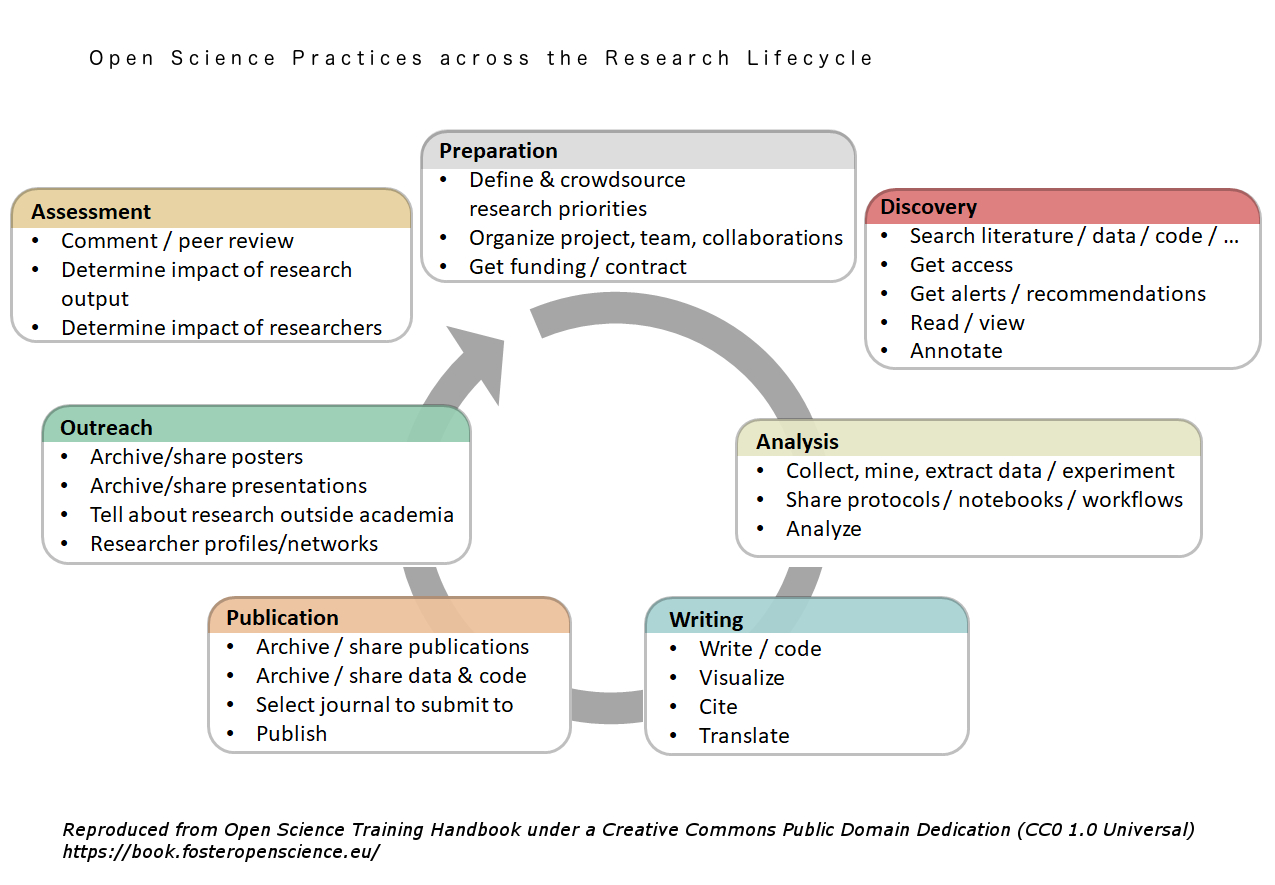 Openness around the research life-cycle

As mentioned in the What is Open Access? section of this guide, Open Access can be seen as one component in the move towards making research open, transparent and accessible, often described as 'Open Science'. The drivers behind the Open Science movement include: increasing expectations from funders around openness, and impact and engagement beyond academia; pressures on the current scholarly publishing model; the reproducibility crisis in the social sciences; interest in text-data mining and the reuse of data; and the increasing availability of enabling technologies and platforms. For more information about the different facets of Open Science and to get started using OS principles and tools, the FOSTER Open Science Guide and Center for Open Science website both provide excellent starting points.