Citation tracking can also involve looking at the connections between different authors and journals and at patterns in citation and publication over time. Different databases offer the opportunity to sort by number of citations, to investigate patterns, create graphs and maps to provide a visual depiction of these citation patterns, to search within citations and to examine journal rankings.

Web of Science and Scopus are major databases for tracking citations.

This libguide focuses on tracking citations using Web of Science and Scopus. In addition an overview of Google Scholar and selected other databases is provided.

This YouTube clip provides information how citation tracking (otherwise known as citation searching) works, how it can be useful to you and the three main citation tracking databases; Web of Science, Scopus and Google Scholar.

To access a specific database through the University of Melbourne Library select the 'A-Z Databases' link from the library homepage. You will be prompted to login and then will be taken to the search screen as below. Enter the database title in the search box or click directly on the first letter of the database name. See the example below for Web of Science. 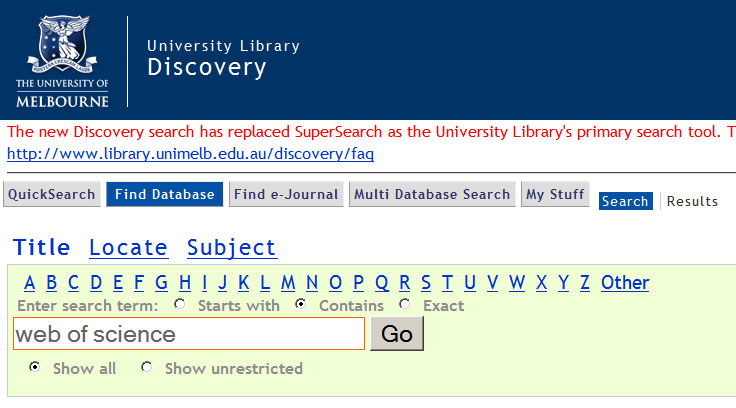