The United Nations is an international organisation founded in 1945 after the Second World War by 51 countries committed to maintaining international peace and security, developing friendly relations among nations and promoting social progress, better living standards and human rights. More about the UN. 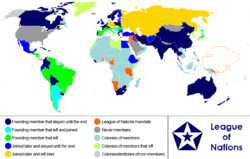 The League of Nations (1919 - 1946) was the forerunner to the United Nations. It was established in 1919 under the Treaty of Versailles 'to promote international cooperation and to achieve peace and security'.

The General Assembly is the main deliberative, policymaking and representative organ of the United Nations. Comprising all 193 Members of the United Nations, it provides a unique forum for multilateral discussion of the full spectrum of international issues covered by the Charter. The Assembly meets in regular session intensively from September to December each year, and thereafter as required.

The International Court of Justice is the principal judicial organ of the United Nations.

The Security Council has primary responsibility, under the Charter,for the maintenance of international peace and security.

The Economic and Social Council  (ECOSOC) is a founding UN Charter body established in 1946. The world’s economic, social and environmental challenges are discussed by the Council, which issues policy recommendations.

The Secretariat — comprising an international staff working in duty stations around the world — carries out the diverse day-to-day work of the Organization. It services the other principal organs of the United Nations and administers the programmes and policies laid down by them.

Recent Books on the UN