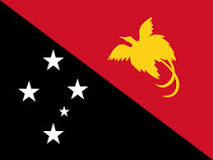 The Independent State of Papua New Guinea comprises the eastern half of the large island of New Guinea and a number of smaller island provinces extending from the nearby Bismarck Archipelago east to Bougainville. There are 19 provinces in PNG, including the island of Bougainville and Port Moresby, the National Capital District. The diverse population embraces dozens of different ethnic groups. The current population (UN projection, mid-2019) is estimated at 8,526,000. The official languages are Tok Pisin (widely used and understood), English (spoken by 1%-2%) and Hiri Motu (spoken by less than 2%). There are about 839 indigenous spoken languages. Papua New Guinea is a member of the Commonwealth.

The eastern half of the island of New Guinea was divided between Germany and Britain in 1885. The German colony was named ‘German New Guinea’. ‘Papua’ was firstly a British protectorate and then became a British colony in 1888. It was placed under the authority of the Commonwealth of Australia in 1902 and renamed the Territory of Papua. After World War I the British Government assumed a mandate from the League of Nations to govern on behalf of Australia. Japan occupied the island during World War II. After the surrender of the Japanese occupying forces at the end of the War, the United Nations granted the trusteeship of both territories to Australia, which continued to administer the combined areas of Papua and New Guinea until independence in 1975. Papua New Guinea finally achieved independence as a sovereign state in 1975.

The Country Review: Papua New Guinea (annual publication: 2000-current) (UniMelb access) provides a detailed and up to date overview of the economy and investment climate in PNG.

The sources of law are:

The sources of law are expressly listed in the Constitution and the Underlying Law Act 2000. The Constitution provides in s 9 that the laws of Papua New Guinea consist of only:

For commentary on the Underlying Law Act and its implications, see:

Customary Law – the Constitution Schedule 1.2.2(1) and the Underlying Law Act s 1 both define custom as ‘customs and usages of the indigenous inhabitants of the country existing in relation to the matter in question at the time when and the place in relation to which the matter arises, regardless of whether or not the custom or usage has existed from time immemorial’. The Underlying Law Act gives precedence to the written law (s 4(2)(a), 4(3)(a) and s 6)) and precedence of customary law over the common law (s 4(3)(c) and s 6). Section 6 provides that courts shall apply the laws in the following order: (a) written law; (b) the underlying law; (c) the customary law; (d) the common law.