The ASEAN Intergovernmental Commission on Human Rights (AICHR) was established in October 2009, under the auspices of the Association of Southeast Asian Nations (ASEAN).

On November 18, 2012, the AICHR adopted the ASEAN Human Rights Declaration. The Declaration and other AICHR documents, such as the Five Year work Plan 2016-2020, Annual Report, and Guidelines on the AICHR’s Relations with Civil Society Organisations, are available as PDF files on the AICHR's Resources.

There is as yet no South East Asian regional human rights court or mechanism for hearing human rights complaints at a regional level. Despite this, Civil Society Organisations have submitted several complaints to the AICHR, requesting it to respond to human rights violations in the region. There has been no response from the AICHR.

See more on the Human Rights Declaration and the establishment of the AICHR, including civil society critiques of the Declaration and Commission, on the website of the International Justice Resource Centre.

The ASEAN Commission on the Promotion and the Protection of the Rights of Women and Children (ACWC) is an ASEAN regional human rights institution established in 2010. This Commission was included as part of ASEAN’s 2009 community-building plan - the 'Roadmap for the ASEAN Community (2009-2015)'.

The ACWC does not yet have a specific mandate to receive and investigate complaints of human rights violations.

ACWC is obliged by its Terms of Reference to keep the public periodically informed of its work and activities. ACWC does not yet have its own public information strategy or a website, but publishes press releases on the ASEAN website. These press releases and other documents regarding or by ACWC are available on the Human Rights in ASEAN Online Platform ACWC Documents page.

See the ACWC 'scorecard' on the Human Rights in ASEAN Online Platform.

The Human Rights in ASEAN -  Online Platform (HRA-OP) is primarily designed for sharing information among civil society organisations, lawyers, and others who work to promote and protect human rights in ASEAN Member States. HRA-OP is a joint initiative between the Asian Forum for Human Rights and Development (FORUM-ASIA) and the American Bar Association Rule of Law Initiative. The website is owned and maintained by FORUM-ASIA.

This resource contains much useful information, including:

The Human Rights Resource Centre is a non-profit academic centre at the University of Indonesia in Jakarta. It was established in 2010 to foster an institutional network to produce high-quality, independent research on human rights issues of most pressing concern to ASEAN. The Centre's core thematic areas are the rule of law, business and human rights, and the rights of vulnerable populations). The Centre has a partnership network throughout Southeast Asia (currently in 7 out of 10 ASEAN Member States). The Centre publishes its research as open access reports.

The Asian Human Rights Commission (AHRC) includes 5 ASEAN nations - Myanmar, Cambodia, Indonesia, Philippines & Thailand. The AHRC is an independent NGO which seeks to promote greater awareness and realisation of human rights in the Asian region, and to mobilise Asian and international public opinion to obtain relief and redress for the victims of human rights violations. AHRC promotes civil and political rights, as well as economic, social and cultural rights.

To search for civil society organisations in individual ASEAN countries, use the CSO Database in the Human Rights in ASEAN Online Platform to choose the country from the dropdown menu. 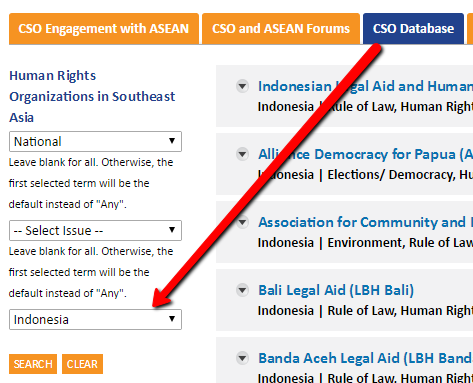 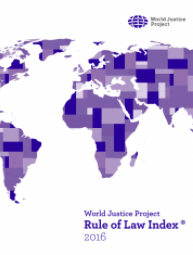 Rule of Law in ASEAN Countries

The latest full report can be downloaded as a PDF. Use the interactive map to view each country's scores.

The following articles are available on open access from the Social Science Research Network (SSRN):

Recent Reports from the Human Rights Resource Centre include: