Introduction to the Canadian Legal System

The Canadian legal system was created by the British North America Act 1867 30 & 31 Victoria c 3 (UK), which became the Constitution Act 1867. This Act united the provinces of Canada, Nova Scotia, and New Brunswick and created the federal and provincial governments. All provinces except Québec inherited the system of common law from the British, while Québec has a hybrid legal system - it inherited both the common law and civil law and the French civil code. Québec's private law is based on the civil law, and its public law is based on the common law.  Canada's two official languages are English and French. Federal legislation, and legislation from Manitoba, Ontario, Québec and New Brunswick are published in both English and French, as are decisions of the Supreme Court of Canada. 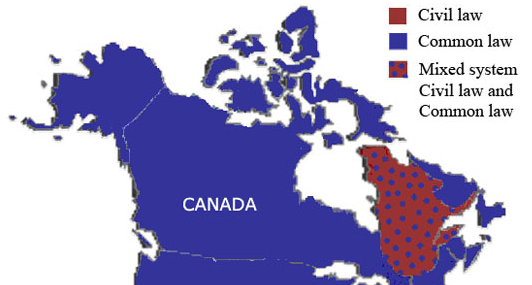 For introductions to the Canadian Legal System see: