Full judgments from district and high courts are available through the Supreme Court database. But you can track the progress of a particular case by going directly to the website of the individual courts. The easiest way to navigate to the court's website is to google the court name. For example: Pengadilan Negeri Surabaya SIPP ( Surabaya District Court). Information is only in Indonesian, but basic information such as case numbers, party names and trial schedules can easily be identified, and some of the links and headings on the pages can be translated to English.

The Supreme Court and Constitutional Court are at the apex of the judicial system. There are four different court systems below the Supreme Court: courts of general civil and criminal jurisdiction, religious courts, state administrative courts, and military courts.

As Indonesia is a civil law country, cases are not considered to be a source of law. Cases have no precedential value so courts are not bound by decisions of other courts at the same level or higher. There is thus little need for law reporting in Indonesia.

Statements as to preferred interpretation or policy are issued by the Supreme Court in the form of surat edaran (circular letters), and these tend to be more influential than previous decisions, even of the Supreme Court.

However, in recent years the Supreme Court has developed an online case tracking system (Sistem Informasi Penelusuran Perkara). District and High courts, the Supreme Court and religious courts must make their decisions available online. These decisions are in Indonesian only, apart from Constitutional Court decisions, which are also in English. 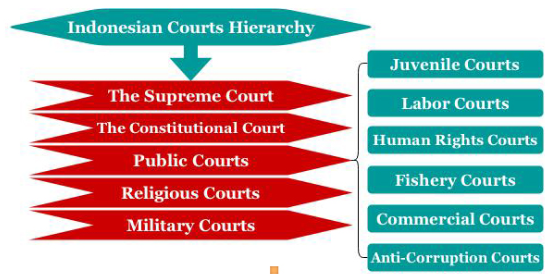