Where to find Singapore Cases

Other report series on LawNet include:

Until 1994, the Judicial Committee of The Privy Council in the UK was the court of final appeal for Singapore. 1989, Singapore abolished appeals to the Privy Council in all cases other than those involving the death penalty, or in civil cases where the parties had agreed to such a right of appeal. The remaining rights of appeal were abolished in 1994.

The Supreme Court of Singapore is now Singapore's highest court. It is made up of the Court of Appeal and the High Court. The Court of Appeal is the highest court of the country and, as the court of final appeal, only deals with appellate cases. The High Court hears criminal and civil matters at first instance, and also appeals from Subordinate Courts. A special division of the High Court is the Singapore International Commercial Court (SICC), which is designed to deal only with transnational commercial disputes.

A Constitutional Tribunal (comprising three Supreme Court judges) has limited jurisdiction in constitutional matters. See the Judicial Review box on the Constitutional Law page of this guide for more information.

Muslim law is administered by a Syariah Court. However, the High Court has concurrent jurisdiction with the Syariah Court on specific matters relating to maintenance, custody and division of property. 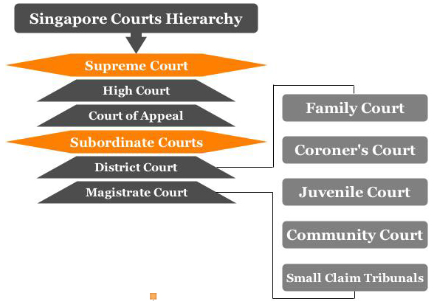 Use LawNet (UniMelb staff & student access) to find cases on a topic. You can: 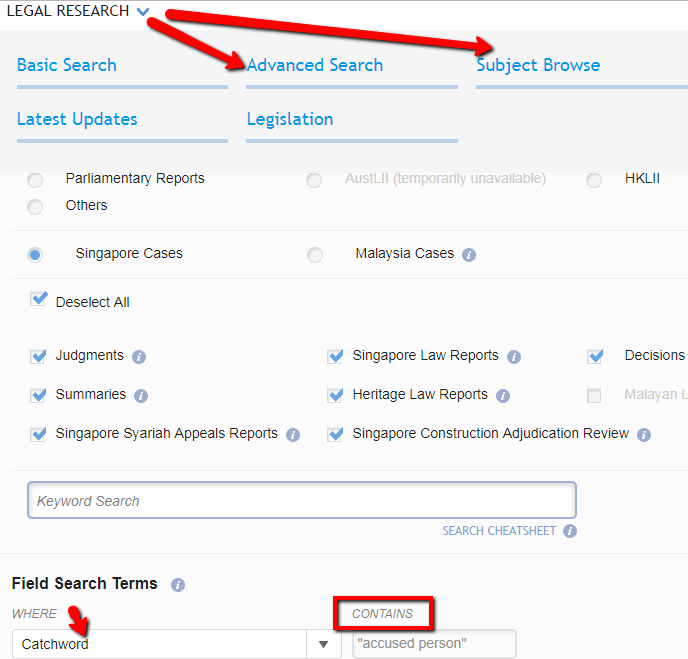 3. Once in a case, the Subject Tree appears at the top of the left-hand menu. The folders open up to more specific topics. Use this to find more cases on your topic.

Navigate to your case. At the top of the screen, above the case citation, you'll see a ribbon summarising subsequent treatment of the decision. Clicking on this will open a new window containing a hyperlinked list of cases in order of treatment.

Keeping up to Date

Email and rss feed alerts can be set up so you are kept up to date with new bills, legislation passed etc.

Books on Courts and the Judiciary