The following law reports are available online from the Myanmar Law Library database (open access). All are pdf replicas of the original print reports.

Note that since 1970, reports are in Burmese only.

AsianLII - Myanmar includes all the Burma Law Reports in English ie: from 1947 - 1969. These cases are linked to LawCite, a worldwide case citator, so you can see cases cited in the decisions and cases citing the decisions.

The Submissions and Decisions database on the website of the Constitutional Tribunal of the Union of Myanmar contains the decisions of the Tribunal. To date it has heard few cases. Some decisions are in English only, others in Burmese only. 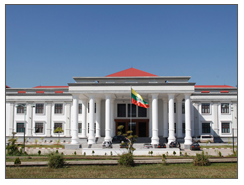 In present-day Myanmar, the judicial system is established under the 2008 Constitution and the Union Judiciary Law (Law No 20/2010).

For more detailed information on the court and judicial system, see the following open access articles and book chapters: 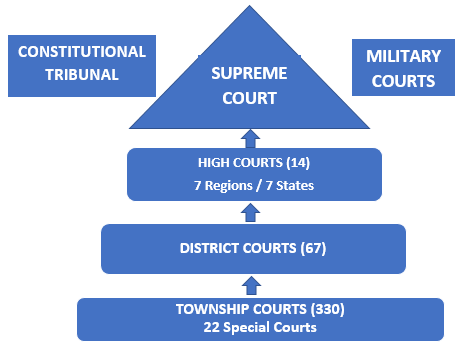 This depiction of the court hierarchy was created by the Guide author, based on a PowerPoint slide
shown in a presentation by Melissa Crouch at the Melbourne Law School on 18 April 2018.