For a useful history of the court system in Vietnam, and its Soviet, French and American influences, as well as its current structure and functions, see:

Military tribunals established at various levels in the Vietnam People's Army, the highest being the Central Military Tribunal, which is subordinate to the Supreme People's Court.

The people's procuracies (also called the people's office of inspection and supervision) are the prosecutorial authority in Vietnam. They also supervise and inspect judicial compliance by government agencies and officials. For every people's court, there is a people's procuracy. The military has its own military procuracies. The highest procuracy is the Supreme People's Procuracy. 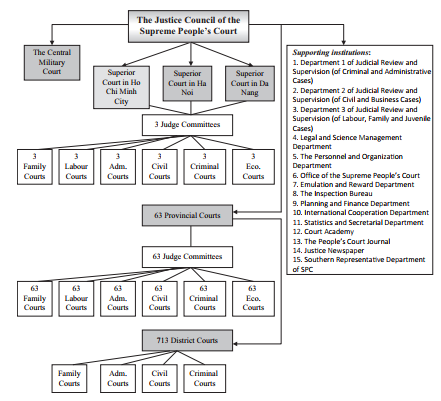 Vietnamese Jurisprudence as a Source of Law?

Resolutions and the yearly collection of typical cases are available from the website of the Supreme People's Court. They are published in Vietnamese only.

See also the Supreme People's Court Benchbook (AsianLII) which provides information, guidance and resources to assist judges and other legal professionals. The Benchbook is in English.

Decisions of the courts were not generally published until 2017 (see box below).

Many types of decisions and judgments are not permitted to be published. More information on the publication of judgments and decisions.

The Electronic Judgments Portal is completely up to date and can be browsed or searched. The portal home page links to New Judgments and Decisions. The Judgment - Decision page can be browsed, and there is a search function that provides searching in several fields. It is easy to view and navigate this site in English (by clicking the 'Translate this page' icon in the top menu bar, or right-clicking on the page and selecting 'Translate to English'), but the decisions themselves are in Vietnamese only.

The independence of the judiciary remains a concern, despite reforms following the promulgation of the 2013 Constitution. For recent commentary on judicial independence, see for example:

Pip Nicholson & Nguyen Hung Quang, 'Independence, Impartiality and Integrity of the Judiciary in Vietnam' in the following book: