As with other common law counties, the primary sources of Singapore's laws are:

Muslim Law in personal legal matters, such as family law and inheritance, is also a source of law by virtue of the Administration of Muslim Law Act (AMLA) (Cap 3, 2009 Rev Ed). Muslim law is administered by the Syariah Court.

For more information on the sources of Singapore's laws, see The Singapore Legal System by Eugene Tan and Gary Chan - on Singapore Law Watch (open access).

Singapore has a common law legal system as a result of its colonial past as part of the British empire. The influence of the English common law on the development of Singapore law is generally more evident in certain traditional common law areas, such as contract, tort and equity, than in other statute-based areas such as criminal law and company law. Although judicial decisions from England and other Commonwealth jurisdictions are not binding on Singapore courts, Singapore has paid great deference to English decisions until recently, as Singapore departs from the decisions of English courts and develops its own local jurisprudence. Jurisdictions such as India and Australia have strongly influenced the approach and content of some of Singapore's statutes.

Modern-day Singapore was founded by the British. Singapore, together with Malacca and Penang, the two British settlements in the Malay Peninsula, became the Straits Settlements in 1826, under the control of British India. In 1946, Singapore became a Crown Colony. Self-government was attained in 1959. Singapore joined the Federation of Malaysia in 1963 but left the Federation in 1965 to become a sovereign, democratic and independent state.

Singapore is a constitutional republic with a secular government. Its structure of government is set out in the Constitution and is based on the Westminster system of the United Kingdom. Governmental power is distributed across three branches of government: the legislature, executive and judiciary. Separation of powers is a basic feature of the Constitution. Singapore has an elected President as its head of state. Singapore’s legislature comprises of a single house of parliament. 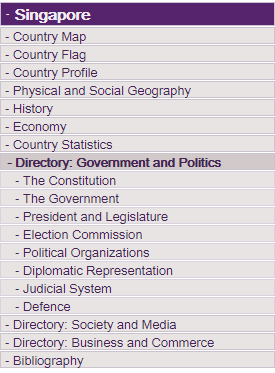 Rule of Law and Human Rights in Singapore

Update on the Rule of Law for Human Rights in ASEAN: The Path to Integration (2016) (open access) (published by the Human Rights Resource Centre). Includes a detailed chapter on Singapore.

US Department of State Country Reports on Human Rights Practices for 2016: Singapore

Bünte, Marco,'The Rule of law in Illiberal Contexts: Cambodia and Singapore as Exemplars' in:

The most popular and authoritative English language daily newspaper in Singapore is The Straits Times. This paper began in 1845.