Text of the Constitution of Lao PDR

There have been three versions of the Constitution since the creation of the state of the Lao PDR in 1975:

An official translation of the 2003 Constitution is available on WIPO Lex and the Lao Laws website (open access).

Pre-1975 there was one other Constitution

The first Constitution was adopted when Lao PDR was still a member of the French Union. The Constitution of 1947 provided for the establishment of a constitutional monarchy, which was the form of government of the country from after the withdrawal of the French from Indochina in 1954 until the abdication of King Savang Vatthana and the proclamation of the Lao People’s Democratic Republic in December 1975. The 1947 Constitution is available on HEIN Online (UniMelb staff & student access).

Abstract: Since the national constitution was adopted in Laos in 1991, a number of laws and regulations have been enacted. Enforcement and citizen awareness, however, remains low, due in part to the lack of a history of rule of law in the country.

The Law on Making Legislation (2012 - English translation) establishes the legal system for developing and bringing legislation into legal force.

Laws are enacted by the National Assembly after presentation by the government, and are promulgated by and appended to presidential decrees.

Information on legislation and the legislative process is available in English on the Lao PDR Official Gazette website.

In accordance with the Law on Making Legislation, the Lao PDR Official Gazette (open access) was launched online in October 2013. All legislation - in force and proposed (draft legislation), including the Constitution, laws, ordinances, resolutions, decrees, edicts, decisions and instructions - is available in the Lao language on this website. It is the most up-to-date and reliable source of Lao laws. Existing legislation not posted on the Gazette website by January 2015 is no longer valid (Law on Making Legislation art. 80 and 83). The website of the Official Gazette, although containing legislation in the Lao language only (with a very few exceptions), lists all legislation in English. It can be searched or browsed by date of issue, e-gazette publication date, responsible agency or type of legislation.

Research tip: the translated laws below may not be up to date. Laws are often amended, replaced or repealed. To check that the law you are using is still valid, check the Official Gazette website - if the law is not listed there, it is not valid. Alternatively, it may still exist in an amended form - this will be listed in the Gazette.

Laws of the Lao People's Democratic Republic on AsianLII (open access) contains an up to date but incomplete collection of major laws arranged alphabetically by title. 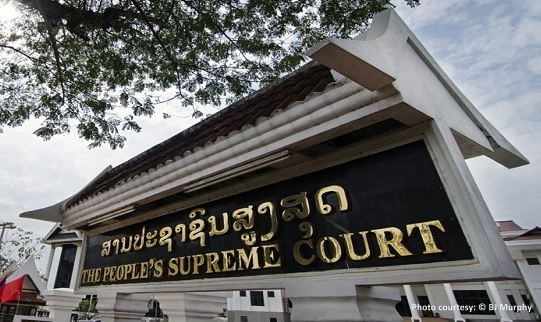 Lao PDR is a civil law country and, as such, jurisprudence is not recognised as a source of law and is not part of the legal system. Court judgments are not publicly published. Court websites can only be accessed by password.

The hierarchy of the Lao PDR court system is:

The 2003 Amended Constitution made substantial changes to the judiciary, and gave new powers to the Supreme Court, which had previously been the province of the government. For example: